NCPA December/27/2019
On January 15th, NCPA drama February will have its first round of performance in successive seven days to bring the audience poetic and meaningful experiences. This well-made work is co-produced by drama director LI Liuyi, music director CHEN Qigang, Composer WANG Zhiyi, costume and style designer MEN Xiaoguang, and lighting designer DENG Wen. As drama performers shine on stage for a long time, WANG Wei, LU Fang, OU Ning and HUANG Chengcheng also join in the drama, together with WANG Haowei and other outstanding artists of the NCPA Drama Ensemble. They will present this drama brimming with unique characteristics of the times.


On the afternoon of December 26th, the crew of February held a set visit for the press at the NCPA. The leading performers shared highlights to visitors. XIE Fang, senior film artist who plays TAO Lan in Early Spring, was also present. Early Spring, a film based on the original work of ROU Shi, was adapted and directed by director XIE Tieli. As a readaptation of literature, the film left its mark on the history of Chinese film. Early Spring was released in Shanghai in 1964, causing a sensation that Shanghai people had to line up for tickets throughout the night. SUN Daolin, XIE Fang and SHANGGUAN Yunzhu also made their names as stars of the film. XIE Fang, who acted the heroine TAO Lan, is familiar to the audience with her other film The Song of Youth. In 2016, she was awarded the Lifetime Achievement Award by the 33rd Hundred Flowers Award. XIE Fang has portrayed many intellectuals. Through her performances, she has become a screen icon of the intellect in the mind for generations.

XIE Fang, who acted the heroine TAO Lan, is familiar to the audience with her other film The Song of Youth.


Drama February, to be staged in January, 2020, will vivify the “Furong town” in ROU Shi’s writing by distinctive stage design and staying true to the original. The audience will be enlightened by the piano and letters composed by XIAO Jianqiu, and the drama will convey the warmth of “February”, dispelling the cold winter, as well as the clouds that block out hope.

The performance will be on the stage from January 15th to January 22th. 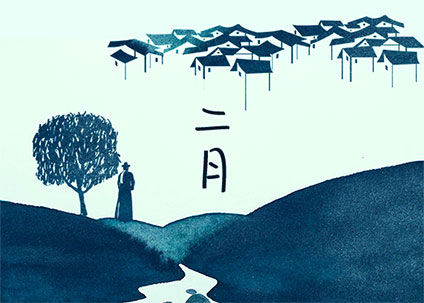