Drama Time of Heroes to be staged at NCPA

The National Theatre of China has began to produce the drama in April this year as its first “high-definition drama”. After half a year’s efforts, the drama will soon have its premiere for a new attempt at integrating live performance with an online one. The director BAI Haotian uses an artistic technique to synchronise the stage time with real time, so that the audience can gain an immersive experience in the theatrical space. The set director builds the entire stage into a magic cube of the building frame structure, with difference scenes, created on the three-layered revolving stage. The visual director KONG Qingyao creates a high-tech stage atmosphere with lighting and colours.


Many A-list performing artists, including LIU Peiqi, NI Dahong, HAN Tongsheng, XIN Boqing, ZHANG Jie and LIU Jingjing, will get together on the stage to act out a fight between the good and evil characters. Mr. HU, played by LIU Peiqi, is an upright man. NI Dahong, who appears as WEI Haishan in the drama, digs deep into the criminal motive by acting the role of a trustworthy antagonist. Police Commissioner ZHENG, portrayed by HAN Tongsheng, is a cool-headed backroom boy who has an aura of dignity. It owes to his well-planned arrangement and flexible command that the crisis gets resolved imperceptibly in the end.


XIN Boqing, who acts the role of Riot Brigade Leader MENG Ping, has consummate acting skills, which have made him popular with a wide audience. WANG Erda, by ZHANG Jie, is a grassroots civilian policeman. Different types of police appear on the stage one after another, and the traffic police cavalry forms a defensive wall under the leadership of the actress LIU Jingjing to keep the people safe. 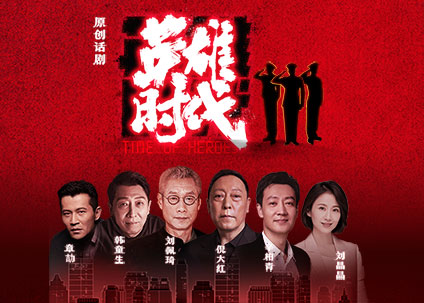