NCPA May Festival is about to kick off

NCPA April/09/2019
The yearly NCPA May Festival will come in time on May 3rd, 2019 and continue until 18th, with wind music as its theme. Famous Chinese and foreign wind instrument virtuosos and ensembles will be invited to the May Festival to perform a variety of pieces at 17 concerts of chamber music and orchestral music to show different charms of Chinese and Western wind music.

On May 3rd, the May Festival will kick off with China NCPA Orchestra and world-class wind instrument virtuosos and orchestras under the leadership of its Artistic Director LÜ Jia. Four world-renowned wind music performers will get together at the concert — clarinetist Paul Meyer, flugelhornist Gábor Boldoczki, bassoonist Gilbert Austin and Chinese Oboist LIU Mingjia. In addition, famous violinist Siqing Lu, Artistic Director of the May Festival, will also attend the concert to play a solo in Bach’s Double Concerto, and the China Horn Ensemble will also appear.

Violinist Siqing Lu, Artistic Director of the May Festival, will also attend the concert. 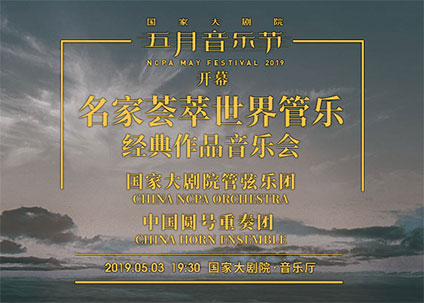