NCPA April/18/2019
“Never compare shining pearl to bright moon, as countless people work painstakingly to dive in the sea and seek after pearls at night”. This sentence, cited from a poem by SU Shi in the Song Dynasty, depicts the great hardships behind the career of “pearl divers”. Les Pêcheurs de Perles, created by French composer Geroge Bizet, is one of the relevant works of pearl drivers. As a co-production of the NCPA and Staatsoper Berlin, Les Pêcheurs de Perle will be presented at the NCPA on May 15th - 19th, 2019. A heavyweight director of the German film industry has been invited to deliver his first opera direction.

Born in 1945, Wim Wenders cut a figure in “New German Cinema” movement of the 1970s, and has already emerged as one of the most important masters in the contemporary German film industry. He is respected as one of “The Four Heroes of New German Cinema”. He is not only a director of many award-winning feature films, but also an outstanding screenwriter, producer, photographer and writer. Der Himmel über Berlin won the Best Director Award at Festival de Cannes. The documentary films Buena Vista Social Club, Pina and Das Salz der Erde have all been nominated for Academy Awards of the USA. At the age of 70, Wim Wenders won the Honourary Golden Bear Award for Lifetime Achievement at Berlin International Film Festival in his hometown. Four years later, this internationally-renowned film director will impress Chinese audiences with his first opera work.

Still of Les Pêcheurs de Perles (world premiere, Berlin, 2017)
The creative team and cast is also worthy looking forward to that they will bring together the premiere cast at Staatsoper Berlin. Cheography, costume, lighting and multimedia design will also unfold the spectacular stage of the premiere again. The China NCPA Orchestra and China NCPA Chorus will perform under the baton of Italian conductor Donato Renzetti and chorus master Samuel Coquard, respectively. 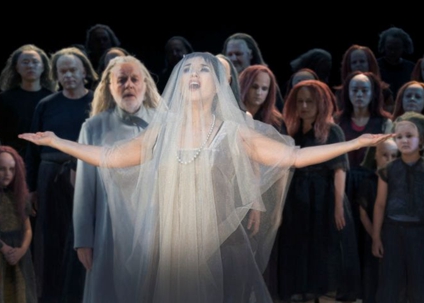