NCPA July/10/2019
On July 19th-20th, the Komissarzhevskaya Theatre will appear at the NCPA International Theatre Festival 2019. The director Alexander Morfov, a winner of the “Golden Mask Award”, the highest Russian theatre award, has given a reinterpretation of Molière’s famous comedy Don Juan in a thought-provoking way. The ingenious adaptation, exquisite performance and regionally featured audiovisual presentation will bring audiences an unforgettable theatrical experience.

Director Alexander Morfov graduated from National Academy of Theatre and Film Arts “Kristyo Sarafov”. He became famous for directing a series of Shakespearean plays, and has a special liking for classical dramatic texts. Adhering to a cross-cultural, theatre-oriented and contemporary stage idea, he routinely produces a work based on the profound accumulation of Russian theatre and from the broad perspective of contemporary theatre art. In 2001, his production The Tempest premiered in St. Petersburg and won the “Golden Mask” Award, the highest Russian theatre award. This version of Don Juan premiered in 2004 and won the “Gold Lamp Award”, a Russian award for theatre. The classic literature Don Juan has been produced with new ideas by every theatre director in the past three hundred years. In Morfov’s version, “Don Giovanni” has a profound and delicate image that looks serious, lazy and world-weary. He walks step by step towards the final punishment. Morfov also changes the last scene, where the statue puts Don Juan on trial in a different way, giving this classic masterpiece a new look.

The Komissarzhevskaya Theatre, which is to present this version of Don Juan on stage, is a time-honoured legendary theatre. It made an appearance at the Beijing Laoshe Theatre Festival with Doktor Zhivago last October. It is also known as the “Theatre of Great Siege” because it was founded in 1942, when Leningrad was being besieged circle upon circle. In those days, a group of artists full of passion for dramas began to give performances in the besieged city, promoting the opening of the theatre. With a repertoire in which there are both future-proof classics and new modern works, it is one of the most popular theatres in St. Petersburg. 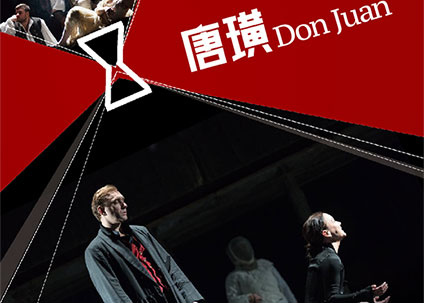