Live-streamed in 8K concert, Beijing Cantata Showcased the Beauty of Beijing under the baton of ZHANG Yi

The Central Axis has stretched across the heart of Beijing since ancient times. The beauty of the Central Axis is like a majestic piece of music. The symphonic chorus Beijing Cantata, which took two years to complete, conveys the beauty of the architecture and culture along the Central Axis of Beijing. The lyrics are based on thousands of years of Beijing’s history and reveal the city’s rich history, culture, characters and customs, featuring both the majesty of the national capital and atmosphere on the streets. The overture Beijing and following movements, including Yongdingmen, Temple of Heaven, and Bridge of Heaven composed by MENG Weidong, contains elements from Chinese folk-art forms such as storytelling in Beijing dialect with drum accompaniment, Xihe Dagu (big drum), Beijing folk songs and Beijing Opera. Xihe Dagu performer ZHAO Ning and Chinese opera singer WANG Chao interpreted Beijing-style melodies with superb skills, capturing distinctive folk customs of the region. Composer TANG Jianping has made some new attempts in movements Tiananmen Square, Bell and Drum Towers and the coda. He said, “from the grand founding ceremony of the PRC, to the remembrance of the martyrs in front of the monument, then to the sight of the first rays of sunlight on Tiananmen Square, I wanted to write about the first sunrise in the PRC with music.” In the rendition of the lyrics “Time flows away like the water”, the two coloratura sopranos ZHANG Wenqin and KONG Di gave the sounds “tic” and “tac” respectively, which also expressed the dialogue between humans and nature. The combination of high-pitched instruments, woodwinds and coloraturas evoked the brightness of water. The solo of soprano LI Xintong took the theme of time to a higher level, which conveyed thoughts and feelings about life, nature and all other beings. In the coda, tenors WANG Chong and LIANG Yufeng, mezzo soprano CHEN Guanfu, baritone WANG Haitao and dubber ZHAO Ling also joined in; together with the NCPA Orchestra and Chorus, they rendered an enthusiastic melody to reflect the joy of the people. “Beijing, we sing with you; Beijing, we dream of you”. The beautiful melody revealed the magnificent beauty of Beijing’s Central Axis and the city’s rich cultural heritage, as well as presenting a new spirit of Beijing in the new era.


The 8K live-stream concert was jointly presented by the NCPA, the Ultra HD Video (Beijing) Production Technology Collaboration Centre and Beijing Branch of China Mobile. In recent years, the NCPA remains committed to innovation and application of ultra-high-definition video technology in the field of arts communication and promotion. The world’s first 8K panoramic sound opera film by the NCPA, The Dawns Here Are Quiet, won the Lumiere Award for the best 8K production in early 2020. In August 2020, “Exuberant Voices”, the first performance of the “Bright Autumn Cadenza” online series, became the world’s first live-stream performance in 8K and 5G. This year, the NCPA will continue to explore the application of 8K live and recorded technology in the field of stage art videos.


With a resolution of up to 7680 x 4320 pixels, 8K video technology is capable of presenting dynamic images of up to 33.17 megapixels with 16 times the picture quality of 2K technology, allowing previously un-representable details to be clearly displayed, bringing ultra-high-definition picture quality to the viewers for an immersive experience. The application of 8K technology will open up a new horizon for the film and TV industry and may have a huge impact on it and people’s consumption patterns through the production terminals and application terminals in the future. As the first 8K live-stream concert in 2021, Beijing Cantata was presented for the first time in the world’s first 5G+8K Movie Theatre at the China National Film Museum with the most advanced 8K film projector. 5G+8K technology is a cinema projection technology led by the Film Museum and jointly launched by a number of competent companies, which has been praised by experts. The live-stream studio of NCPA Arts Library will continue to present live-stream performances on a BOE's 110'’ 8K TV screen. Beijing Cantata was live-streamed in 8K cinemas, on TV screens and on HD platforms across the internet, once again showcasing the unique charm of Beijing's technological innovation and artistic excellence in the combination of "Art and Technology".


In the live-stream performance, famous host KONG Jie, composers MENG Weidong and TANG Jianping, and ICOMOS Vice-president JIANG Bo, also gave a pre-talk. The four guests stepped onto the Zhengyangmen Gate located on Beijing’s Central Axis to talk about the story of the creation of Beijing Cantata, as well as the culture and customs along the Central Axis of Beijing.


The pre-talk and the live-stream performance were supported by the Beijing Municipal Bureau of Cultural Heritage. 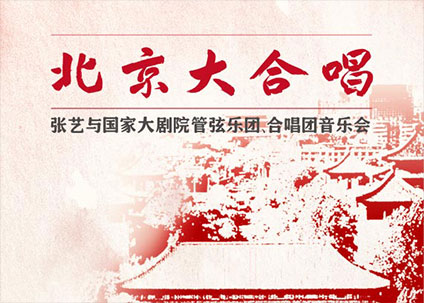