NCPA April/09/2021
Wuhan Philharmonic Orchestra appeared at NCPA on April 8th and performed Reborn from the Fire, a large-scale symphonic work for fighting COVID-19, under the leadership of the conductor SHAO En, unveiling the 7th China Orchestra Festival.


2021 marks the 100th anniversary of the founding of the CPC. This year’s China Orchestra Festival is themed by “One Hundred Years of Brilliance - Echoes of the Times”. During a period of one month from April 8th to May 7th, 22 symphony orchestras from 14 provinces (autonomous regions and municipalities) will share the stage at this grand event of symphony. More than 50 symphonic works with Chinese themes will take the audience back to the eventful revolutionary years to enjoy the beautiful landscape of China and eulogize the happy life of the new era.


One year ago, when it had undergone 76 days of bitter battle against COVID-19, Wuhan reopened its gate. After a lapse of one year, the Wuhan Philharmonic Orchestra rendered the symphony Reborn from the Fire on the stage of China Orchestra Festival, turning the pathos of epidemic outbreak, the aid from all sides, the assistance among people and the confidence in defeating the virus into musical notes, electrifying the audience.


The large-scale symphony commission Reborn from the Fire, which began to be created in the hardest time of fighting COVID-19, is China’s first large-scale symphonic work to be themed by epidemic prevention and control. It is composed for the Wuhan Philharmonic Orchestra by four composers including GUAN Xia, SHAO En, YANG Fan and HUANG Kairan under the leadership of GUAN Xia. At the core of the work are the composers’ reflections on life and confidence in defeating COVID-19, as well as their exploration on Chinese symphony creation. The artists of the Wuhan Philharmonic Orchestra also hope to pass great love on to the audience through this work.


The concert will be broadcast online on April 10th, when netizens will be able to listen to the exciting performance of Reborn from the Fire and another two works, LYU Qiming’s Ode to Red Flag and GUAN Xia’s Symphony No.1 The Years of Burning Passion, on NCPA Classical Channel or other network platforms. For appreciation guide, the famous host SA Beining, a native of Wuhan, will be present on invitation. Composers GUAN Xia and SHAO En will talk freely about their insights on the creation of Reborn from the Fire. ZHANG Shouzhong, President of the Wuhan Philharmonic Orchestra, and concertmaster LI Jia will share their story of fighting COVID-19, and present to the online audience the bustle of Wuhan in this spring by showing them the cherry blossoms in Wuhan University and the civic life of Wuhan.


The older generation of conductors ZHENG Xiaoying and BIAN Zushan will conduct the performance of their most representative work The Echoes of Hakka's Earth Buildings and The Red Detachment of Women. At the same time, the backbones of the contemporary music scene including LÜ Jia, YU Long, YU Feng, TANG Muhai, LI Xincao, ZHANG Guoyong, SHAO En, TAN Lihua, ZHANG Yi, LI Biao and TANG Qingshi, as well as rising conductors LIN Daye, XIA Xiaotang, QIN Zhifeng and CHENG Ye, will also raise their batons over their orchestras to give performances. From well-known classics Ode to Red Flag, Yellow River Cantata and The Butterfly Lovers to nine new works composed in order to mark the 100th anniversary of the founding of the Communist Party of China, including Journey for a Century, Ode to China, Fathers, Let’s run to the Sea to look at the Stars, Without the Communist Party of China, There Would be No New China, Ningbo Suite, Warm Mountains, Lighthouse and Winter Olympics Symphony, the audience will listen to China Story in music to recall the past hardships and glories.


It is worth mentioning that on the 100th anniversary of the founding of the Communist Party of China, NCPA works with the Beijing Municipal Education Commission in giving “Ideological and Political Lesson in Concert Hall” to teachers and students from the universities and colleges in Beijing. They are invited to NCPA to watch the performances given at the China Orchestra Festival. In this “great ideological and political lesson” filled with the beautiful melody of classic music, they learn to love the Party and their country.


At the concert given by the Wuhan Philharmonic Orchestra, when Ode to Red Flag and The Years of Burning Passion were played, the teachers and students present were very excited. When Reborn from the Fire was played, they were touched much more deeply. CAO Jiangtong, a teacher from the Beijing Union University, said, “These classic pieces contain a profound memory of Party history and demonstrate the power of indomitable faith. They are vivid materials that can be used to teach the young students the history of the Party. We should seize this opportunity to actuate the teachers and students to “sing” enthusiastically on campus so that these excellent artistic works can be turned into ideological weapons for educating and uniting teachers and students.” XIAO Zehui, a student from the Beijing International Studies University, said, “When listening to the inspiring classic music, I felt as if I were stepping into every lively scene in the history of the Party, further deepening my understanding of what had been taught by the teachers in the classroom. So refreshing, it is an unforgettable ideological and political lesson.”


The NCPA will select 12 concerts from this year’s China Orchestra Festival as the content of “Ideological and Political Lesson in Concert Hall”, which will benefit about 4,000 teachers and students. Besides, NCPA will join hands with the Beijing Municipal Education Commission in the second half of this year to perform fine artistic works for the teachers and students at the universities and colleges across Beijing under the theme of “Youth Blooming for the Party and People”. A number of dramas, dances and concert programmes will be collected from the universities and colleges in Beijing to carry forward the glorious tradition and fine style of work of the Party, the core socialist values and the spirit of outstanding communists. The story about Party history will be told vividly to reveal its great course of struggle. 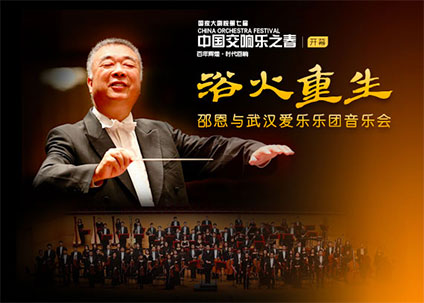