NCPA Drama Commission The Crossroad to be revived soon

NCPA October/14/2021
On October 21st–24th and 26th, the NCPA drama commission The Crossroad will get revived. On October 13th, the cast and crew held a media conference, where director GONG Xiaodong, lead actors WU Jing’an, HONG Tao, ZONG Ping, YIN Shixian, LIU Wenyi and LIU Dawei, as well as young actors of the NCPA Drama Ensemble, shared with the media the rehearsal progress.

The cast and crew held a media conference, sharing with the media the rehearsal progress.
Photo by NIU Xiaobei
In 2019, the NCPA presented the drama The Crossroad to celebrate the 70th anniversary of the founding of the PRC. WU Jing’an, HONG Tao, ZONG Ping, YIN Shixian and other amazing actors delivered the gripping revolutionary drama on an all-metal decorated stage. The creative team, including scriptwriter LI Baoqun, director GONG Xiaodong and stage designer ZHANG Wu, has refined the production over the past two years. The upgraded script introduces a new character, the Communist ZHAO Mengsheng, as an “intruder”, intensifying the dramatic conflict and making the story more tightly structured. The drama not only highlights the complicated plight of underground Party member ZHANG Yufeng, played by WU Jing’an, on the eve of the uprising, but shows his spiritual journey as he leads the people to freedom without hesitation. The overall stage design will continue to feature the mechanical lift platform with a metallic quality.


WU Jing’an, HONG Tao, ZONG Ping and YIN Shixian will renew their brotherly bond in the The Crossroad. From revolutionary youths with a passion for overthrowing the imperial system, to heroes defending the country against the Japanese army, then to senior generals at odds in the Northwest Army, the four actors brave the challenges and portray their roles with fervour. National First-class Actor LIU Dawei will play the role of ZHAO Mengsheng, a Communist Party member. The young actor LIU Wenyi from the NCPA Drama Ensemble will play the role of HAN Xiaoyu, adding a touch of tenderness to the cool style on stage. In addition, WU Song, LIU Xiaowen, LIU Beibei, WANG Wenjie, DONG Hongchuan, FENG Yang, YAO Dingzhi and other young actors from the NCPA Drama Ensemble are also working around the clock in rehearsals. 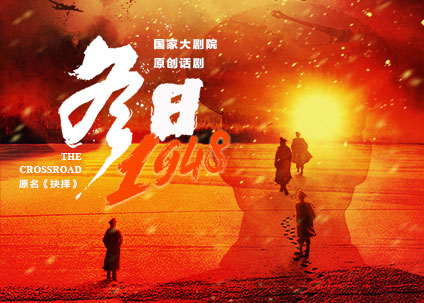